I first ran into perspective in high school during a first year drafting class.  I was fascinated with it, forming two dimensional shapes emanating from a disappearing point.  Perhaps it was because it was the first time I ever drew anything that had any relevance to the actual subject matter, or point of view.  But as time passed, I became more aware of the nuances of perspective, particularly as it pertained to what I see as opposed to what you see.  I found it curious that virtually no two people see the same thing the same way.  Or, more specifically, how something can be manipulated in such a way that it distorts reality.

A friend of mine recently sent me an email with several pictures of thrill seekers in Brazil.  There is apparently a large rock ledge there that challenges the risk takers among us.  People that presumably value their life a lot less then I value mine.  Or so it would seem.

Being a person that has a fear of heights, my breath immediately caught in my throat and my heart took the down elevator.  I could no more imagine myself sitting on the rock, much less hanging from it.  But, that was just the beginning.  I went on to view the following pictures.

Just sitting here now, seeing them again as I post them gives me the creeps.  I immediately decided that the photos had to have been photo shopped, but the accompanying message advised that the pictures were real.  I silently wondered how many people die each year as a result of this profound stupidity.  And, why wouldn’t this ledge be fenced off to guard against people performing these acts and risking death.

Well, I’ll tell you why.  It is all a matter of perspective.  What you and I see and what they see are two different things.  In reality, the ledge is only a few feet off the ground. The danger is minimal. The perspective, theirs and ours, is what creates the end result. 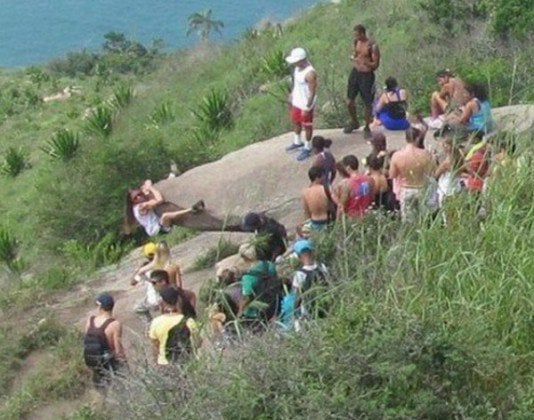 My world I’m afraid is not as real as it once was.  This type of illusion is a common  occurrence, not only visually but verbally. What is written and printed and espoused today, the things that we are asked to believe as the truth, are only as credible as the perspective of the creator.   We can virtually bend, twist and shape almost anything to make it what we want it to be as opposed to what it really is.  There used to be an old saying that went “don’t believe anything you hear and only half of what you see”.  It still rings true with me today, however, I’m not sure I believe anything I read either.  Just sayin!!

I am a retired manager living in Southern Maine and a would be writer of poetry, narratives, short stories, and random opinions. While I tell myself that I write for my own pleasure, I in fact write for yours. As such, I hope that I put to paper a few scribblings that you might enjoy. If so, feel free to use them, but please honor the terms of my copyright when and if you do. They may not be much, but they are still a piece of me. I appreciate your checking me out and hope that you find something that will encourage a return visit. Thanks for stopping by.
View all posts by oldmainer →
This entry was posted in Artificial Intel, Death, Fear, Insight, Life, Perspective, Vision, Wisdom and tagged Commentary, Danger, Life, Observations, Perspective, Random Thoughts. Bookmark the permalink.